My daughter, Ainsley, was born on Aug. 28, 2004. Nine months later, we received her diagnosis of Angelman syndrome (AS). The news was delivered with the same canned statement so many parents before me had received, “There are no treatments. There is no hope for a cure. Get her into physical, occupational and speech therapy.” And, lastly, “Take her home and love her.” I had already mastered the “love her” recommendation and was able to tick that off my list immediately, so off I went to find the best therapists available to help her reach her fullest potential. A few weeks later, Ainsley and I had a full schedule of evaluations, appointments with medical specialists and multiple therapy appointments. Despite receiving one of the worst diagnoses a parent could hear, I felt really positive and optimistic for my little girl’s future. That feeling lasted about two weeks before that statement started haunting me. “There are no treatments, no hope for a cure.” All I could think was “Why not? There is always hope.” 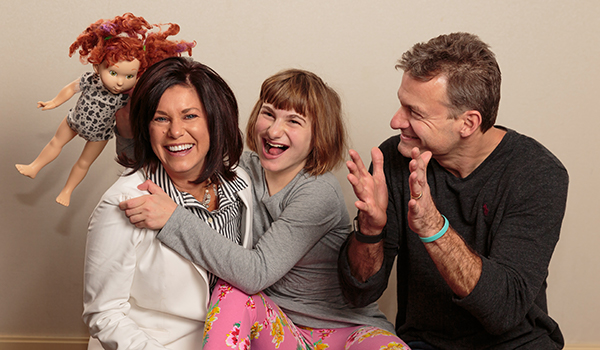 I began spending what precious little free time I had researching Angelman syndrome, and, with no formal training in science or medicine, I had a lot to learn. This endeavor led me to a group of Angelman parents who were all asking the same question I was about treatments and a cure, “Why not?” In fact, the more we all learned about the disorder, the louder our question became – mainly because, as complex as the symptoms of AS are, the etiology of the disorder is rather simple, and simple challenges can always be overcome.

I remember distinctly the chilly February morning in 2007 when I woke to the news that AS had been cured in the mouse model. I still have a difficult time articulating my feelings upon reading that news, but that was a defining and pivotal moment that set in motion a series of events that defined numerous lives, including my own. Hope was born and delivered that day.

I traveled with my like-minded group of Angelman parents to a conference in St. Louis that summer to meet one of the researchers who cured AS in the mouse model, Dr. Edwin Weeber. I had only one question for Dr. Weeber, “What is it going to take to cure AS in our children?” The answer was simple: funding for research. There is almost no government funding available for AS research and the only active organization in the United States at that time designated community-raised funds to education, family support and basic science. There simply wasn’t enough funding available to focus on translational research aimed specifically towards treatments and a cure, and there was little interest in changing that.

FAST was formed on Ainsley’s fourth birthday, Aug. 28, 2008, by a group of parents with expertise in the fields of science, medicine, finance, law, entrepreneurship, management and entertainment. We adopted a clear and concise mission to bring practical treatments into current medical practice as quickly as possible. We developed a unique funding philosophy that set us apart from similar nonprofit organizations and placed us on a solid trajectory to identify therapeutics and a cure for AS.